Q:  Mackenzie Hughes, thanks for joining us for a few minutes.  Another successful day.  Despite the little hiccup at 11, you still managed five birdies for 2‑under 68 today, right at the top where you’ve been all week.  With that, just a few comments on today.

MACKENZIE HUGHES:  Yeah, today was good overall.  Obviously had a little bit of a hiccup there on 11, but it was bound to happen.  I had been bogey‑free up to that point so it caught up with me.  Yeah, just compounded a few mistakes there and I thought I could get on the green from where I was on 11 and ended up with a few bad lies in the bunker and ended up three‑putting.  All in all, to bounce back the way I did and to shoot 65 was a good day.

Q:  Take us through what’s your feeling on the tee box at 12 and the value of that pitch from the front of the green.

It was really hard.  It was almost like I had been punched in the face there making a triple after everything seemed to be going pretty smoothly there.  So telling myself that I still had a lot of golf left.  Yeah, that pitch on 12 was probably my shot of the day because if I follow that up with a bogey, the wheels start to come off even more.  So that was a big save there, for sure.

Q:  Are you pretty good at putting things like that behind you?  I know that’s a different situation, but can you move along and forget it or not?

MACKENZIE HUGHES:  It sat with me for a few minutes, but once I had gotten up there or I had a pitch shot to hit and once you get into those shots, you can’t be having your mind somewhere else trying to hit that pitch shot.  So I put it behind me pretty well.  I don’t know why, sometimes those bother you, sometimes they don’t bother you as much.  I was definitely upset, but I knew I had tons of golf left and that it really wasn’t a bunch of terrible shots, it was some bad breaks and some really awkward lies.  But yeah, I was definitely a little bit rattled, but I was able to bounce back.

Q:  Along the same lines, the way you were able to finish, do you gain a lot of momentum or confidence from that?

MACKENZIE HUGHES:  Yeah, I think it’s a big boost to finish strong, especially that closing stretch.  I’m going to have to play that closing stretch well tomorrow to win, so to play it the way I did, and there’s some tough holes there on the water.  Wind’s in off the left on some of those holes and it’s really tough with the wind blowing the way it is, so definitely have some momentum going into tomorrow.  It was nice again to bounce back and to feel like I’m kind of going this way, not stepping back.

MACKENZIE HUGHES:  Pitching out would have been a good option looking back on it, but I think the way it looked, I had nothing behind me.  Obviously the lie was a little bit sandy.  I had my feet below the ball so it wasn’t great there.  If I had been on grass hitting that same shot, I think I would have been fine, but my feet kind of slipped.  I don’t know, I just thought I could kind of hit it right through that bush and it just came out ‑‑ I mean, I never expected it to stay in the bunker.  I thought even if I hit a bad shot it’s going to be somewhere up near the green, and for it to come out the way it did was really unfortunate.  In hindsight, I would have pitched out or not hit it there.

MACKENZIE HUGHES:  The next one, it spun around the bunker but it was like spinning in its pitch mark.  So I could like see it and I was like oh, great.  So it’s half buried in the bunker again, I’ve got 104 yards.  Chunked that one.  I was trying to pick it, chunked it.  Now I’m in the next bunker, another lumpy lie.  I was like, this hole’s never going to end.  But it finally did and it worked out all right.

Q:  Mackenzie, this year it’s been kind of a whirlwind for you looking at maybe having to go back to Q‑School as recently as like July.  I guess standing up here with the 54‑hole lead in a Tour event, is there any hint of it being surreal or wow, this has happened fast, I guess emotions like that about how quickly it’s kind of gone?

MACKENZIE HUGHES:  Yeah, I don’t know if it’s hit me that the ascent has been so fast to be where I am today, but just the ‑‑ obviously the situation is big, to be leading a Tour event.  It hits me at times out there.  I have to kind of control my emotions and not get ahead of myself.  You can almost ‑‑ you imagine yourself in that same spot maybe on Sunday having a chance to win and then you kind of get the shivers, the goosebumps thinking about it and you have to just say all right, I’ve got the shot in front of me that I have to focus on.  So trying not to think about where I was a few months ago, it certainly gives me good perspective when I look back on that.  But I know I can compete with these guys so to be where I am, I feel like I’m where I belong.

Q:  Tomorrow you’re playing with a couple of guys who have been around the block a little bit.  Billy’s won a FedExCup and Camilo’s won four or five times, he won the TOUR Championship one year.  Are you pretty good about not really worrying about who you play with or do you see it as just another opportunity to not only maybe win the tournament but win playing with a couple of proven winners?  What do you think’s going to be going through your head there?

MACKENZIE HUGHES:  Yeah, I mean, certainly if I could play with a couple of college buddies I might be a little bit more comfortable, but that’s part of professional golf and I’ve dealt with that for the last four or five years.  So you don’t really think too much about it, but it’s going to be a fun day regardless of who I’m playing with.  The challenge isn’t to beat those guys, it’s just to manage myself and keep myself in check.  It’s going to be a really fun day.  Those guys are going to be nervous as well.  I mean, I know they’ve won tournaments, but you would be kind of kidding yourself if they said they weren’t going to be nervous.  Everyone’s going to be fighting the same kind of nerves trying to win and hopefully I’ll be on top again tomorrow.

Q:  Two questions, who taught you to putt or did you do that all yourself?

MACKENZIE HUGHES:  I mean, I guess ‑‑ I feel like putting is an art, not really ‑‑ there’s so many ways to get the ball in the hole.  My stroke might not be conventional or taught by people, I don’t know, but just if I get comfortable on the greens and I find a comfortable stance and grip.  So I kind of found that back in July and I’ve been putting pretty well ever since then.  I would say my two coaches, Derek Ingram and Scott Cowx back in Canada, they helped me the last six, seven, eight years work on putting, get it more consistent.  I’ve always been a good putter but I’ve been streaky at times and this year I’ve been able to kind of dial it in and be a bit more consistent day in and day out.  Again, confidence with the putter is a big thing, too, and I’ve got that right now.

Q:  Secondly, since we’ve been talking so much about keeping your poise, is that something that’s come natural to you or do you have any good club‑throwing stories for us, meltdowns, anything good, we’ll take it.

MACKENZIE HUGHES:  I used to be a bit of a hothead when I was really young, like when I didn’t have any right to be.  I was not very good and I thought I should be amazing, but I was 12, 13, 14 and I would play with these guys that were older than me.  If they threw clubs, I would throw clubs because you’re around that.  You’re in that environment where you see guys freaking out after a bad shot, you think oh, that’s what people do, right?  So I’m just going to throw my club, too.

I got to a certain point when I realized, okay, this is not the way you’re supposed to behave, this is crazy.  So I would say it’s not necessarily natural to me, but I’ve been able to pick that up the last six, five, six years, since I got to college.  I really matured a lot in college.  It’s a game, and at the end of the day to react the way I was reacting sometimes was just crazy.  I’ve worked on it definitely the last five, six years.  I’m still working on it.  I mean, I could be better, but it’s a frustrating game, as you guys know. 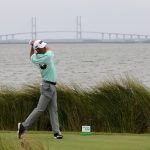 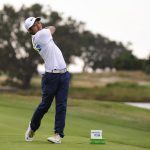