Q:  Charles, let’s talk about today.  First off, the scoreboard had Charles Howell II.  Did you see that?

CHARLES HOWELL III:  I’ve seen it before.  Yes, I did see that.  It doesn’t matter, it’s all good.

Q:  I got a kick out of that.  You were playing really well so I said maybe it inspired you.  Let’s talk about the round today because at 13 under you’re right there.

CHARLES HOWELL III:  Yeah, I thought the golf course played difficult today.  A different wind direction and a bit more wind.  It definitely didn’t give up the easy birdies that it had the first couple days, and tomorrow’s looking chilly and windy again as well so I don’t expect scores to run away that much.

Q:  You’ve worked so hard on your putting over the years, I’ve seen you.  Last two days have been good, 29 putts each of the last two days.  Are you feeling pretty good about that?

CHARLES HOWELL III:  It’s improving, yes.  It needs to get better and I’ll continue to work on it, but yeah, it’s better.  I just look at so many of the good players and what they do when they play well.  They putt well, they score well, they knock in that eight‑footer to get the momentum going and get it on their side, they get a key up‑and‑down when they need it.  Those things like that.  Obviously I’m aware of where I need to get better and I’m working on it.  It’s going in the right direction.

Q:  Talk about tomorrow because, as you know, it’s going to come down to the back nine and everybody’s all bunched up.  What’s your strategy tomorrow?

CHARLES HOWELL III:  You know, I was a bit surprised to see how bunched up the scores were.  Knowing that, you’ve just got to keep at it.  You’ve got to take advantage of the easier holes and get them.  With the wind blowing tomorrow, there’s a few holes where pars are great scores and you keep moving.  But a couple of the par 5s being downwind with this direction, you need to take advantage of it. 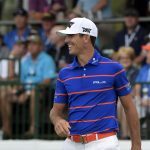 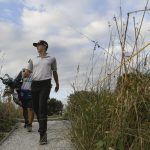