Q. The way this week has gone and even this year, what are you going to take away?
KEVIN CHAPPELL: Learned a lot about myself the last couple days. Really struggled in or near the lead earlier in the year. Got off to a slow start yesterday and really fought hard the rest of the weekend to fight back and keep myself in or around contention.

Really proud of the way I hung in there.

Q. Can you give me any specifics about what you learned?
KEVIN CHAPPELL: I learned that there are really good players out here, like Kevin Kisner can golf his ball.

For me, I had couple penalty shots, couple 3-putts. I got tighten that stuff up and I’ll be right there.

Q. I know you have a relationship with Kevin. Can you talk about how he played today and how he has played this year and the force he’s become on tour.
KEVIN CHAPELL: Obviously doesn’t have any weaknesses. He drives it plenty long. His iron play is phenomenal. When he is making putts he is tough to beat, and we’ve obviously seen that. He’s been in contention a lot this year. This week when he’s shooting 128 on the weekends, pretty tough to beat.

Q. So I guess playing today with him just doing so well, is there a point at all, maybe the back nine, you realize, I’m probably not going to win this?
KEVIN CHAPELL: I would say 7 was a turning point. I hit it in the hazard, and off the tee he kind of got stymied in that bush there. We both had par putts. He obviously made it and then I missed. I think I probably knew it was going to be hard to come back from that.

The back nine got really tough. It was going to be hard to make birdies. Obviously our group made a lot of pars there until 15. Everyone kind of — they both made birdies on 15 and I birdied 16 and 17. That was about it.

He just played some phenomenal golf. It was going to be hard to catch him today.

Q. Being in that final group, is that a different dynamic?
KEVIN CHAPELL: Yeah, I mean, I guess there was a tournament inside a tournament there towards the end. Graeme and I were playing for second place. It was weird looking at the leaderboard where you had a shot or two cushion over the next place.

Obviously that’s nice, but goes away and then he wasn’t going to let anyone else do that today. 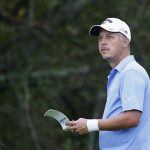 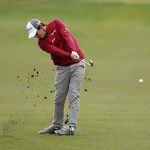