Q. Yesterday you described what was nonideal conditions for you to play golf in and you kind of had those this morning, so how did you play so well?

DAVIS LOVE III: Well, for the most part I kept it in play. I didn’t get in too much trouble. I hit a couple bad drives and a couple wrong distance iron shots, which is understandable in this kind of conditions. But I putted well. That’s what I said in the media room yesterday, if I putt well, I can shoot a good score. That’s what I felt coming in here. What didn’t happen in Vegas, I putted well today and it saved me.

Q. How important is it you know because you’ve been here before, but how important do you feel it is to get a good round under your belt in the conditions like they were, because players struggled on Seaside today?

DAVIS LOVE III: Yeah, you could see it well, before we teed off you knew it, and you could see it on the leaderboard that the good scores were going to be on Plantation today. But it will flip tomorrow, we’ll have to go out there. It might not be as bad starting off as it was; the first couple hours were not nice. We’ll get some wind over there tomorrow, for sure. I think it’s going to be generally the windiest tournament we’ve ever had here. Eventually you’ve got to go to Seaside.

DAVIS LOVE III: It was fun. A lot of memories of when I was the rookie long hitter, people coming out to watch him. That driver, 1 iron or whatever his longest iron is, no 3 wood, that was pretty cool because that was me in 1986. The power is incredible. He didn’t hit it as well as he would like, none of us really did in these conditions, but it’s impressive. He can flight the ball. He’s got a very good short game and you can tell why he’s going to be successful.

Q. How much advantage do you have how many times have you, if you can ballpark that, you’ve played these courses and how much of an advantage does that give you?

DAVIS LOVE III: Well, my advantage this time around is Dru convinced me, my son, to go out and play some on Plantation, and we went out a couple times and played it. My chip in early in the round today was because I spent about 20 minutes chipping on that hole on Sunday afternoon. It gives all of us locals a little bit of an advantage, maybe not as much on Seaside, but certainly on Plantation because the guys that don’t live here don’t see it very much.

Q. Davis, I thought you managed your game really well out there and I thought a difficult day with the wind, you were 6 of 8 scrambling?

DAVIS LOVE III: Yeah, I needed that. I misclubbed a few times and hit a few bad drives that put me out of position to get on the green, but yeah, the main thing was putting. I’ve been hitting the ball pretty well. As I said in the media room yesterday, if I make some putts, I can shoot some good scores, and today I did. I made a couple 20 footers, had a chip in, made a couple nice par putts for saves and kept the round going.

Q. As the unofficial host of this event, I thought it was really difficult conditions. This is as windy as I’ve ever seen it.

DAVIS LOVE III: Yeah, this is our worst day we’ve had in nine years of conditions, especially that first couple hours. That front kind of hit right when the first tee time was going off and it was kind of nasty there for a while. It got better as the day went on. We’ve been really blessed, we thought Monday the pro am was going to be a rainout, we thought we were going to struggle through Tuesday, Wednesday, Thursday, and it’s actually been better than predicted. The sun will be out tomorrow and it will be a much nicer day.

Q. I’m a little curious. Thirty, 35 years ago you were the new kid on the block, prodigious length, and now you’re paired with Cameron Champ. Your first time playing with him?

DAVIS LOVE III: Got that driver out, not that long iron, and wanted to see how far he was going to hit it. And then now this week he’s got the driver, no 3 wood, and then a long iron. The one head cover trick I pulled out in ’86, so it’s fun to watch that.

It’s just impressive to see. He hit a couple that were just astounding how far they went. He didn’t hit it as well as he normally does, none of us probably did in the wind, but it’s an impressive game and it’s fun to watch.

Q. You putted well, but how much did the experience come into play over anything today, experience here, experience in the weather conditions?

DAVIS LOVE III: I think obviously playing around here helps, knowing the golf course helps a little bit. Dru and I did have a couple good nine hole practice rounds. One day we played nine on each course, and then Sunday afternoon we played over here on Plantation just because we knew we didn’t know it as well. And we knew the wind was going to be up, so we got it Sunday afternoon in big wind.

Unfortunately, my best shots, I got the most confidence on that little 15th hole, hitting in the wind, hitting little 4 irons in there, trick shots with Dru on Sunday. Then I missed the green today and made a bogey.

I think the practice helped getting a little more used to see, we always have really good greens here, but it’s the same thing for us. Now they’re a little bit faster, they’re tour speed, tour conditions, so that was nice to get out there on Sunday and see the golf course. And experience certainly helps. A lot of guys know Seaside, but not a lot of guys know Plantation.

Q. Was it inevitable that you were going to have a weather week like this?

DAVIS LOVE III: Yeah, we knew. We get these fronts.

DAVIS LOVE III: Well, it’s a blessing to say this is our worst day in nine years. It’s not unplayable. There’s some holes at 9:30 on Seaside that probably weren’t fun, but it got better as the day went on. Our forecast, if you looked at it five or six days ago, we were worried about Monday, Wednesday and today. I think we got away with one a little bit.

Q. Do you feel like with the change in the schedule next season that you’re going to have even more people wanting to play here next year, or you have no idea?

Q. I mean, I can’t imagine why anybody wouldn’t want to.

DAVIS LOVE III: Yeah, there’s going to be 10 or 11 of these in the fall rather than eight. I don’t know, you wonder who is going to want to play in the new schedule. Maybe play Ryder Cup or Presidents Cup and then they’ll take a little break and then they’ll play Asia events, take a little break, and then maybe they’ll come here just to be ready for the new season. We get a great field here every year, we’re happy and RSM’s obviously happy and it’s a good day for all parties. Sea Island really likes this date.

Q. Do you have any chips out with Tiger where you’ve got to lean on him a little to come visit?

DAVIS LOVE III: I don’t have any chips right now. You know, we were playing 16, 17, 18 and I’m looking down the oaks and all those cars and I’m thinking, Do we really want Tiger? We have a parking problem already, where are we going to put people. Every year, that’s our biggest I was in the pro am yesterday and I was getting all kinds of requests, Can you help me with parking? When that’s your biggest dilemma…

Obviously we’re missing a few guys that we normally get down here, but we gained a few. Cameron’s created a buzz coming and Ernie and Retief and Padraig and some of my old nemeses, and a bunch of good young guys. This is what’s so great about RSM, they want to know what the field is but they never worry about the field. We get a bunch of good guys, their customers are always happy and we are always happy.

Q. How would you compare the way this course is laid out to something like a Hilton Head? Because I haven’t walked the course yet, I seem to be here on days that it’s cold.

DAVIS LOVE III: It’s wider, it’s wider than Hilton Head. It’s different. The guys from NBC Golf Channel came here the first time and they went out on Seaside and they went, “Oh, my gosh, this is gorgeous. This is going to be the best TV other than maybe Pebble Beach.” Because Hilton Head has 17 and 18 on the marsh and we have all these holes on the marsh, all these holes on the water. Fabulous.

DAVIS LOVE III: Don’t tell the Sea Island guys, but I would take Pebble views over these. But other than Pebble, there’s nothing that compares. Unless you get to Hawaii, there’s no I mean, the marsh views over there, the marsh holes, like every hole over there, you’re looking at something beautiful. Yeah, we’re really lucky. We’re lucky our practice facility is on hundreds of millions of dollars worth of real estate, so we’re lucky that it doesn’t get blown like Glenn Abbey. 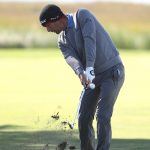 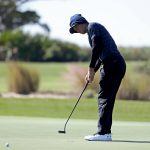