Q. Bubba, what a great 64, and even with a double bogey, a whole bunch of birdies. You have to be feeling pretty good.  It was tough out there.

BUBBA WATSON:  Yeah, it was very tough.  You know, playing the other course yesterday and then today it was going to be windier, you don’t know what to expect, especially my first time here.  So to make a couple birdies right off the bat helped out, changed the momentum a little bit.  And then the one ball that stuck in the tree, we found it.  But, you know, to make two birdies coming down the stretch, it will make dinner taste a little bit better.

Q. Now, Dennis said today on our broadcast, was talking a little bit about the golf, he feels like you’re able to control it, you can judge your distances better. Would you agree?

BUBBA WATSON:  No, the Volvik golf ball is a great golf ball.  It was unbelievable around the greens.  The Titleist ball, I don’t know what the difference is, I don’t produce the balls, but just my mind, I want to play golf now and right now I’m swinging at it pretty nicely.

Q. Now, you were home with Angie while she had her knee surgery.  What prompted you to come out?  I know you’ve been doing a lot of practice.  Were you just ready and itching to get out here?

BUBBA WATSON:  Yeah, just trying to figure out why I struggled last year.  What we figured out was the mental, preparing for kindergarten — not for me, for my son — preparing for Angie’s knee surgery.  It’s been a tough go.  She’s had to re-staple her wound there.  So it’s one of those things we’ve been preparing for for about a year, so my mind kind of got off of golf.  Being home and being with the family and everything, I realized how much I missed the game of golf and that’s why I wanted to come and play in these tournaments.

Q. Well, it sure seems like you’re ready to go. All the best for the weekend.  Thanks for your time.

BUBBA WATSON:  Thanks a lot, thank you. 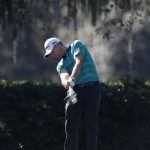 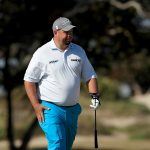