Q:  Billy, I know that you’ve had chances to win here before. How nice is it to be back in the mix again?

BILLY HORSCHEL:  It’s always nice.  This place is a special place.  Obviously the courses are pretty amazing, but Todd Anderson being my instructor, being from here, being director of instructor at Sea Island for a long time, you want to play good because it looks good on you and it looks good on him.  Obviously I live just right down the road in Jacksonville and I’ve been coming here since freshman year of college, so I’ve had chances to win here in the past, whether it be in college or the PGA Tour and I got it done once in college and would love to get it done another time here.

Q:  I know you’d kind of like the redemption and I know you’ve talked about it many times, you’ve brought up what happened when you were in contention before coming down the stretch and how unhappy you were with how you behaved and how you performed. How nice would it be to get that redemption?

BILLY HORSCHEL:  It would be nice to get that redemption, and if I win, it’s great.  To show people from 2011 to now, five years now, I’ve changed, I don’t handle myself in that way anymore.  I handle myself a lot more composed, a lot more professionally on the golf course.  Sure, I still get upset at certain times, but the way it was in 2011 was disappointing, was not the look I wanted the people to see the person I am and to be the role model I am hopefully to young kids.  So the redemption factor winning would be great, but whether I win or not, show them in five years I’ve changed in the way I can handle myself.

Q:  Billy, well played out there, 10‑under par heading into the weekend. Obviously you work with Todd Anderson, you’ve spent a lot of time up here, you’ve played well up here and have a pretty good comfort level.

BILLY HORSCHEL:  Yeah, I do.  This place is pretty special.  To come up here and feel comfortable on this golf courses is a nice thing, but it’s also a little added pressure.  My teacher’s here.  I want to play well where my teacher works, it looks good on him and looks good on me, too.  But I’ve been feeling really good with my game.  We took seven weeks off after the BMW.  I’ve played, the first round in Vegas I played really well and then since then haven’t played bad just haven’t played as well.  We’ve been working hard this week and we feel our game’s really close.  Hopefully, we can build on it this weekend and get that momentum going in 2017.

BILLY HORSCHEL:  You know, the short game’s been the nemesis for a long time and finally in those seven weeks we finally figured out a technique.  Well, we knew what we were doing wrong, but to figure out the feel and the short game to allow me to chip consistently.  That’s been the big thing is the consistent factor.  There’s weeks that I chip really good and weeks that I chip bad, and more or less just a consistency and it comes down a little bit to technique and not so much practice because I spend a lot of time on it.

And then ball striking, we haven’t hit it as well in the past 18 months, been working really hard.  This summer we finally started clicking on some things, hitting on some things and we’ve just been building off that and it’s been good.  Didn’t hit it as good the back side as I did the front nine, so I need to work and get that figured out.  Not figured out, but still some bad habits I haven’t had enough repetition of balls to get out of the bad habits.  But when it’s good, it’s really good.

Q:  I know you mentioned the short game. You also made a switch with the type of putter you’re using.  You ran off three in a row there on the front nine trying to finish out a good look there at 8.  What’s been the difference with the putter?

BILLY HORSCHEL:  You know, for me the biggest thing was, it doesn’t matter what company it was, when I look at putters, they always look closed to me.  When you put them down, they set closed right away.  For some reason with this one, this PXG Gunboat, when you set it down, it’s really square, slightly open to me, which I like.  I don’t like anything looking left, I’d rather have everything be a little open.  Working on their machine right before Vegas, we rolled some putts and I just rolled it really good.  You know, the bigger putter gives me a bigger spot to mis‑hit the putts, so that’s obviously never a bad thing, I guess.  The PXG’s putter, the switch to this Gunboat, it’s been really good.

I think another thing is the top line.  The line I had below was below the face and this one’s on top so it allows me to line it up a little bit easier, trust where I’m lined up and then all I have to worry about is making a good stroke.

Q:  From someone on the outside, looks like you’re very comfortable with it. Well played so far, good luck this weekend. 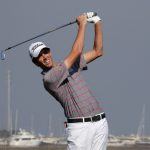 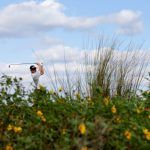