Q:  We would like to welcome Mackenzie Hughes into the interview room.  He’s our 36‑hole leader at the RSM Classic, two‑shot lead going into the weekend.  Mackenzie, if we can just get some comments on your round today.

MACKENZIE HUGHES:  Yeah, I played nicely today.  Wasn’t quite as good as it was yesterday, but hit a decent amount of fairways and gave myself a lot of looks, so it was relatively stress‑free and it was a good day overall, yeah.

Q:  Seems like you took advantage of the par 5s at Seaside.

MACKENZIE HUGHES:  Not really.  Just par 5s in general you typically want to take advantage.  It doesn’t matter how many there are, but if there’s only two or there’s four, you just want to make sure you have a good look at birdie, but it doesn’t really change my approach at all.

Q:  After shooting a 61, when you shoot a 67 in the second round, does it feel like you’re shooting 80 or something?

MACKENZIE HUGHES:  Not quite, but definitely didn’t feel like I was quite firing on all cylinders like I was yesterday.  Yesterday it seemed quite easy.  I don’t want to say easy, but today was definitely a little more work.  And 67’s definitely no slouch of a score and I would take two more of those in a heartbeat.

Q:  Do you have any past experience playing with or against CT? I guess your college years don’t exactly overlap, but have you gotten to know him at all by being on the Web.com Tour with him?

MACKENZIE HUGHES:  Yeah, we played the Web.com Tour together and the Mackenzie Tour together, so I know him fairly well.  I also played against him in the Western Amateur when we were both still in college and we had a match that went 20 holes in the round of 16, so he’s kind of got the edge on me a few times.  So it will be fun.  I’m comfortable with CT and I know him pretty well so it’ll be fun.

Q:  Since you have that match play experience a little bit, do you think you guys would make a good Presidents Cup team one day?

MACKENZIE HUGHES:  I wouldn’t mind teaming up with him for sure.  He’s a great player, really steady.  There’s really no weakness in his game so it would be a great matchup, I think.

Q:  Mackenzie, when you first did so well on the Canadian Tour and had your first year on the Web, that whole year there was a lot of missed cuts, a lot of low finishes. As you look at where you are now, how helpful was that getting kicked in the teeth for a whole year pretty much?

MACKENZIE HUGHES:  Yeah, 2014 was probably my biggest year of learning as a pro because the Mackenzie Tour the year before that, I won the Order of Merit and it all kind of happened in a four‑, five‑week span.  I kind of played well for a month, month and a half and I won the Order of Merit, and all of a sudden I’m blessed with this full card on the Web.com Tour and I don’t really know what it’s all about yet and the full grind of the 25‑event season so that kind of caught up to me really quickly.  Learning a lot, traveling down to South America, things were just different.

So that year for me was huge coming into this year and just as my development as a professional golfer really learning all those things and adjusting to life on tour, so that was probably my biggest year to date.  Even though my results were so poor, learning‑wise I took a lot away from that year.

Q:  Did you beat yourself up at times during that year?

MACKENZIE HUGHES:  Yeah, there were definitely times where you get down on yourself but I have a great support system around me that keeps me up at times.  It’s very easy as a professional golfer, you get lonely on the road, and if you’re not playing well, it can wear on you.  So having that support system around me, parents, my wife, family and friends, that was huge that year.

Q:  Mackenzie, Cody came out a few weeks ago and won right out of the gates. A lot of young guys come out and play well early.  Is there no intimidation factor at all in stepping out on this stage?

MACKENZIE HUGHES:  I wouldn’t say no intimidation factor.  There’s going to be nerves tomorrow and I’m going to be a little jittery starting out, but that’s completely natural and normal and I expect that to happen.  But I just think guys come off the Web.com Tour that, for example, I won in Missouri and I feel like the win there translates to being able to win out here.  The margin is so small that the things I did on that weekend to win that tournament are the same things I’ll have to do Saturday and Sunday to win this tournament.  So I don’t think it’s a lack of intimidation factor, I just think I know my game stacks up against these guys.  If I just stay in my own little bubble, my own little world, I know I can do it.

Q:  When you talk about your game when all it going well, what do you feel is the strongest part?

MACKENZIE HUGHES:  Probably my putter.  I tend to make a decent amount of putts.  So when I’m getting going on the greens, 20, 25, 30‑foot range, I can roll in a few of those and pretty solid inside 10 feet.  So I would say that’s probably the strength of my game if everything’s going well.

Q:  Speaking of what Jeff was talking about, kind of an intimidation level, how much did the weekend with Phil help you? It’s a nice way to start the year.

MACKENZIE HUGHES:  That was huge.  Being with him for two days and with his galleries and all the distractions going on there, that’s probably as good a preparation as you would have for tomorrow and Sunday because I’m not even sure we’ll get the crowds that we had that weekend.  And we weren’t even one of the last groups, we were probably five or six from the last group.

So that’s going to be a good thing for me to lean on tomorrow because when I played with Phil, the galleries were so off‑putting because if you didn’t finish out first and Phil finished out first, they were all running to the next hole regardless if you were putting or not.  So we won’t have that problem tomorrow, I don’t think, but playing with him for two days was a great experience and there was so much learning going on that weekend that I’ll be able to apply this weekend.

Q:  What did you guys talk about? Did he tell you anything about ethanol or solving Social Security or something like that?

MACKENZIE HUGHES:  There were a couple things I probably can’t mention about the Ryder Cup, and talked about some football and talked about his family a little bit, too.  But he was a really genuine nice guy to me, and that I really took away.  I became a really big fan of Phil after that weekend because he was so genuine and nice and he would talk to you and listen and you weren’t ‑‑ you didn’t feel like you were a step below him, which I thought was really cool.

Q:  But you did finish a shot behind him, I think, right?

MACKENZIE HUGHES:  I did, yeah, so I stink.

Q:  Some of your birdies, if you can just give some details since we don’t have much on the Plantation course?

Q:  One more kind of offbeat question that I would just be curious about. Starting out as a rookie on the PGA Tour, if you could build your own game taking components from anyone you want to, tell me whose driving you want, long irons, chipping and putting.

Q:  Mackenzie, thank you very much. 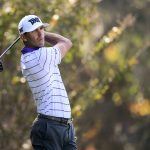 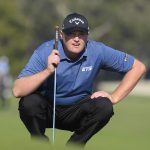