Q:  Billy, obviously late in the day, but you played well today, just didn’t get anything to go in?

Q:  What happened on the putt, Billy?

BILLY HORSCHEL:  I missed it.  That’s pretty much what it came down to.  I blocked it.  I took my time and just blocked it.  I mean, I probably didn’t have ‑‑ I’ve been missing putts right.  Not this week, not in rounds, but if anything, my blade goes open back a little bit and my left hand’s just not strong enough and inline grip, which causes the blade to open up and that’s what it was.  Simple as that, I missed the putt.  Just unfortunate.

Q:  Can you talk about the birdie putt on 18 in regulation?

BILLY HORSCHEL:  Yeah, yeah.  The putts here and the other one in the playoff were really good putts, I thought I made them both.  That’s how it was today, played really good and I got nothing out of my game.  It was just unfortunate because Mackenzie was messing up.  Camilo had a stumble there, too.  I just stayed patient and played my game very well and I was hoping I could get a putt to go.  I was just burning edges all day and that’s just the way it goes sometimes. 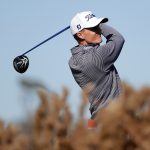 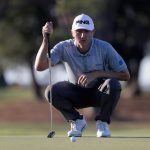