Q.  Vaughn, let’s talk about today.  I followed you on the front nine, you were rolling along, hit in the water at 8, went bogey‑bogey, but then you bounced back nice on the back side?

VAUGHN TAYLOR:  Yeah, I had it going there early, hit some good wedges in and made a couple good par saves.  Then kind of unforced errors there on 8.  I hit 3‑iron into the green and that’s been my miss lately, so just kind of a little push.  Hit a good wedge in there, kind of skipped long, made bogey.  And then plugged it in the bunker on the next hole.  Hit a good putt, didn’t go in.  So kind of lost some momentum, but just kind of hung in there and hit some good shots coming in.

Q.  You really did.  What is the game plan off Plantation compared to Seaside?  When you go out and play this course, it’s obviously different.  What are you thinking?

VAUGHN TAYLOR:  Well, you’ve got a lot of wedges in and short irons, so you immediately get aggressive.  And the course is in such good shape, the greens are perfect, so you know you want to shoot a number over there, for sure.

Q.  So you’re thinking, I’ve got to shoot 4, 5 under maybe on Plantation, right, before you hit Seaside?

VAUGHN TAYLOR:  Yeah, it would be nice.  Wasn’t really counting numbers, but you know you want to get one over there and just go low and try to play solid on Seaside.

Q.  You’re so even keeled, you are, even when things are going south.  I admire that about you.  Is it burning inside of you out there or is that just the way you always are?

VAUGHN TAYLOR:  There’s lot more going on inside than it appears.  Just through the years ‑‑ I had a hot temper when I was young and just through the years I realized I was just wasting too much energy on it.  I still get upset, but I really try to just hold it in and not show my emotions too much.  But there’s definitely, the wheels are turning inside.

Q.  I wondered because you seem like such a nice guy out there.  Like when the ball goes in the water, you never change, but I guess inside it’s really churning?

VAUGHN TAYLOR:  Yeah.  I want to slam the club and break it, but that doesn’t really do much good. 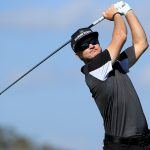