Q. Kiz, how you feeling, buddy?
KEVIN KISNER: Man, that was fun. To come out and that front nine after sitting on a three-shot lead was pretty special. I tried to hit every green on the back nine and just give myself a look, and I did it except for one hole.

What a great way to finish at an awesome place to win my first tournament.

Q. Were you calm before the round? You just came out with a bang again.
KEVIN KISNER: Yeah, I was hitting it so well all week, but I was probably more uptight today than I been all week, or in the last few tournaments. I had a three-shot lead, and basically all you can do is win or fail.

So it’s hard to get geared up and stay focused on what you got to do. Those birdies early kind of calmed me down, and played solid the rest of the way in.

Q. Big birdie on 9. Begs the question, when did you know you had this win in the bag?
KEVIN KISNER: I didn’t want it to get any closer. You know, two shot swing and things get a lot closer, so I wanted keep giving myself chances. I hit some good shots and just didn’t make any of the putts.

I knew coming down 16, once I hit that tee shot, I could pretty much coast it in from there.

Q. Any win any level is special, but you went to school up the road a bit at UGA. How special is winning down in Sea Island?
KEVIN KISNER: Yeah, it’s a special place. I lost two SEC championships on that 18 hole when i had a one-shot lead, and I said, Man, I’m glad I have five today.

It’s a special place. And what a great ambassador of the game Davis Love is. To win his tournament, it’s always going to be special. 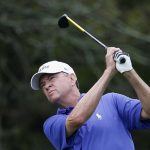