Q. Just talk about the round today and what was going really.
JONATHAN BYRD: Well, I had kind of a rough start. You know, I made a couple bogeys early. I had a 3-putt and real bad tee shot on a hole.

It was kind of a good thing, because it was an opportunity for me to not go the wrong way. I came back and made a good birdie on the next hole.

Was still fighting myself. I made some poor swings and didn’t may have take advantage of the Par-5s on that first nine, on the back nine of Plantation.

But made the turn and just played really, really nice nine holes. Made six birdies on the next nine. Shot 30. Was really pleased.

The wind kind of switched a little bit. Some of the last few holes that were going to be into the wind turned more cross. For a guy who draws the ball, you love a right-to-left wind. I hot some good shots and made some nice putts.

Q. You’ve lived out here on Sea Island for about 13 years. You said you played this course about 20 times. Do you have a favorite between the two courses?
JONATHAN BYRD: I think I like ’em both, you know. That may be a political answer, but I like the small greens on Plantation and how the greens putt.

The greens were really rolling well today. You really get some true, true reads and the ball holds its line. If you’re really hitting ball well I like Sea Side. If you can hit it on the greens close you can have some really good looks. The greens can be quite frustrating at times.

But every course here on St. Simons is great. They do such a great job.

Q. Since you’re being political, where was your best round on either of these two courses?
JONATHAN BYRD: I know where my best nine holes was. My best nine holes is what I just played right there. I shot 30. 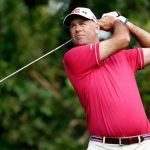