Q. I don’t know if it’s fair to say 66 was a grinder, but at times seemed like you had to grind out there to save some of those pars.
JEFF OVERTON: Yeah, I mean, any time the wind gets blowing on this golf course you know there is going to be a few times when you just got to take your medicine and you don’t feel comfortable with the shot and just get the ball out there and play and find a way to make par.

Q. I liked on 14 when you were walking up to get a view of where you needed to hit your second and the marshal asked you if he needed to move people, and you said you had no idea where it was gonna go. (Laughter.)
JEFF OVERTON: Yeah, the ball was sitting down there a little so I didn’t — I mean, usually just kind of knuckles and it’s hard to get the ball to turn. My caddie did good job. Put one extra club in my hand get a little extra loft.

That’s kind of my natural shot. I can hook it with the best of ’em, so put a little more loft in my hands and it got the ball up and allowed to draw it. The wind helped it too. It was a great little shot.

Q. The putt was probably even better after that chip shot.
JEFF OVERTON: Yeah. I hit a good chip and I was shocked. I hit it like a foot left — right of the hole it looked like it might go a little left. Don’t usually get fooled by 10, 12, 15 feet on a chip.

Looked pretty straightforward. It was a key putt in the round. Do that and make a good birdie on the next hole, and right there in things going into tomorrow.

Q. It was a key putt in the round. Actually a couple holes before you made par from fairway bunkers, too.
JEFF OVERTON: Yeah. Last couple months we been working on the fairway bunker play. I haven’t been doing very good out of those things.

It’s good to get the ball on the green and at least have a chance to make a putt at it.

Q. Prepared for anything wind- and weather-wise in the final round?
JEFF OVERTON: You know, looked like it’s going to be a little colder tomorrow. Luckily enough probably be a little later in the day. I don’t know what the wind is going to do. I am sure it will be pretty similar.

Golf course is in great shape. Just a matter of getting the ball in the fairway and keep putting the way we do. 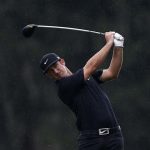