Q. Bogey-free, matches the low round of the tournament. Is that as low as you could have gone or what?
GRAEME MCDOWELL: Yeah, I played nicely today. I left a couple putts out there coming in, but all in all I made a couple clutch par saves on the front nine, which really kind of sort of got the round going.

The wind was really gusty at times. It was difficult in spots out there. I was really happy the way I flighted my irons and the way I rolled it. I didn’t roll it very well on this golf course on Thursday. I felt like I saw the greens better today and did putt better.

Q. Talk about the brain freeze on the first hole. You got up and down.
GRAEME MCDOWELL: Yeah, we’ve been doing a lot of lift, clean, and place in the last few weeks. I’d been told about three times walking to the first tee that it was ball down today.

I literally just got into automatic pilot mode in the first fairway. Before I realized that Michael Kim is looking at me funny. I’m like, Okay, I just picked this ball up. What an idiot.

It was such an automatic pilot thing. It was a real game changer potential right there. I mean, I get it up and down for four, but if I make bogey, who knows what happens to do round from there?

So it was a big 4, and makes for a better story in the end as well.

Q. Yeah, it does. You’re playing so well right now. I remember walking with you at the Canadian Open and talking to Kenny. You were struggle being. Now it’s back like the old G-Mac, isn’t it?
GRAEME MCDOWELL: Yeah, it’s been a long road since then. The Canadian Open was a strange one. I couldn’t get the ball in the fairway off the tee. Was hitting a lot of 3-woods.

That was kind of one of the times the boat kind of hit rock bottom. It’s been a long road back from there. I’ve been working really, really hard, and thankfully I’ve got some good people around me that help me keep believing and trysting and working really.

This has been a result of some confidence building the last couple months, some good, good playing, some good technical kind of work, and great to be back competing again.

Q. And a chance to win two in a row tomorrow.
GRAEME MCDOWELL: That would be special. A lot of good players on this leaderboard. Really the weather is gonna have a big say tomorrow. This golf course is there for the taking if there is no wind. I know, I would be hoping for little bit of breeze tomorrow, let’s put it that way. 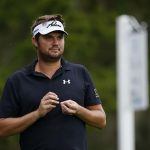