Q. Anything click on the last four holes, just making some putts?

JASON GORE: I just made a few putts. I made one long one and just kind of hit a few shots close. I don’t know, it happens. But it was I’m just an insurance salesman now, so I was just kind of rolling with it. It’s honestly the truth. Didn’t know what to expect, I’m just kind of going with it.

Q. When did you learn you were in the field?

JASON GORE: Sunday night. My car was packed to go to Pebble Beach.

Q. For the TaylorMade deal?

Q. What have you been doing? I mean, you’re joking about insurance sales. Are you actually doing something else?

JASON GORE: Selling insurance. We have our own company, Kirkland Gore. Yeah, it’s been fun.

Q. How long have you been doing this?

JASON GORE: About a year and a half. It’s been totally fun. I’ve been playing a bunch of golf, just been doing a lot of client golf. It’s been fun. Actually realized that I love the game again, that I actually love playing it. Sometimes you get out of here and you just beat yourself up, especially a year that was bad. I had kind of a little back surgery or procedure, whatever you want to call it, and I was struggling through that for a couple years. I feel better now and, I don’t know, it’s been kind of fun.

Q. Having said that, like what would a win do to the insurance salesman business in terms of would that change things?

JASON GORE: It might hold it off until after Augusta, then I would probably retire again. No, I don’t know. Got a long way to go.

Q. Are we talking 40 hour weeks or what are we doing here?

Q. So Kirkland does the work and you’re playing golf?

JASON GORE: No, Meghan does the work. It’s been fun.

Q. And then results weren’t quite there after that. Was there an injury or game went downhill?

JASON GORE: My back felt terrible. I ended up having radio frequency ablation done to my back to just burn all the nerves in there.

Q. When was that?

JASON GORE: This was probably five, six weeks ago. So it’s been pretty good. Now my mid back hurts. Pretty soon I’ll get a headache and then I’ll just die.

Q. Jason, it’s like 44 degrees, the wind’s blowing and you bogey your very first hole. I’m guessing you didn’t see 63 in your future at that particular juncture walking to 2. Tell me about the round.

JASON GORE: I mean, the bogey I made on 1, I hit two great shots. I drove it down the left side on 1 and then hit 7 iron from 1 something or other back into the wind, cold and I just striped it and it went right over the green. I hit a good shot, I just wasn’t expecting to hit it that good. I kind of got lucky a few times, I made a few putts here and there and hit the right shots and missed it in the right spots. You know, it was fun.

Q. You made more than a few putts, you made 114 feet in putts, really good. I thought maybe none bigger than the 14th hole, kind of cobbled together a good round, you missed the drive, missed the green, hit a so so chip, then you make that par putt?

JASON GORE: Yeah, I’ve made a couple of those that have kind of been momentum savers. It’s been fun. I haven’t been playing much, you know, this type, like performance wise. It’s been fun to just come out here and just play. I don’t really know what to expect.

Q. Tell me about that little, looked like a three finger wedge that you hit into 16 out of the fairway bunker. That was just beautiful.

JASON GORE: Yeah, it surprised me, too, bud. I had 86 yards and I just took a little 54 and just kind of tried to just keep the butt of the club moving and came out perfect.

Q. Here on a sponsor’s exemption has to feel good to reward that confidence they showed in you with a fine round of golf.

JASON GORE: Yeah, I’m just so fortunate. I’m 44 now and they somehow believed in me enough to give me a sponsor exemption. I’m just so grateful to Davis and Todd Thompson, everybody. Just thank you, it was a wonderful surprise.

Q. How do you look at the weekend? A huge weekend for you or just one shot at a time, stay in the present?

JASON GORE: I mean, I haven’t played a weekend in so long, I don’t know what to do. I’m just going to go one shot at a time, I’ve got nothing to lose. This is fun for me. Like I was telling them earlier, I’m an insurance salesman now. I totally love being at home and just so this is just this is just kind of fun.

Q. Jason, fair to say you struggled a little bit on either tour you played? What has been clicking so well the last two days?

JASON GORE: Honestly, I just don’t care. I’ve got a real job now and all that good stuff. Just glad my boss would let me off to play, that’s kind of the irony of it. I’ve been playing a bunch at home and it’s been client golf. It’s been kind of fun. I just realized I still love the game. I actually love the game. Maybe not so much being out here, it kind of beats you up after all these years. I know it sounds terrible, but just the simple golf, just a bonus. I was playing well at home. But who the hell knows when you get out here and play in this kind of weather, especially with this competition. Just hanging in there.

JASON GORE: Yeah, three years ago we opened up Kirkland Gore Insurance and that’s what the KGI is on my hat. We just thought it would be kind of fun. I played golf with a friend of mine and he said, “You know, with all the people you know, you would be great at it.” I went home that night to my wife and told her, and she said, “I’ll do it.” I just got my license last week, so I’m officially licensed and everything. So maybe sitting in a class taking a test made me realize, hey, maybe this golf thing isn’t so bad. Just kind of freewheeling life right now. It’s kind of fun to be at home and be a dad. I’ve been pretty lucky.

Q. Do you think you’ll be able to keep that freewheel attitude over the weekend?

JASON GORE: Yeah, why not? I mean, I haven’t seen a weekend in so long, I don’t know what to expect anymore. Yeah, why not? I’ve got nothing to lose. I’ve got past champion status, I kind of already have my number like making the cut here, so anything else was just a bonus. Just go through it and have fun. 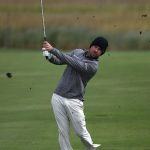 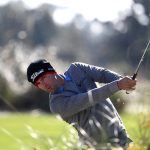