Q:  Let’s talk about today.  Obviously different golf course, conditions were similar to yesterday.  What was the big deal today?

HUDSON SWAFFORD:  There was actually a touch more wind.  I mean, it was blowing about one yesterday, literally no wind.  But yeah, different golf course.  Greens were spinning a little bit more as we found out on the first hole, kind of hard to that back pin.  But the golf course is in great shape, both of them.  You get greens this good, you can make putts.  I feel pretty confident with the putter right now.  Just get it on the green as fast as possible and give myself a chance.  I feel like that’s kind of my weapon right now.

Q:  Seeing you for two days, you seem to be playing very well.  You’ve got to be very excited about the weekend?

HUDSON SWAFFORD:  Yeah, absolutely.  Home game, sleep in my own bed, family here.  It can kind of work both ways.  I’ve had success with home games and I’ve had not‑so‑successful weeks.  This seems to be one of the ones that we’re having fun, relaxed and hit some quality golf shots.

Q:  Better to get back over to Seaside for the last two days?

HUDSON SWAFFORD:  Yeah, absolutely.  I’m a big fan of that golf course.  The greens are perfect, some of the best we’ve played all year.  Looking forward to going back over there and playing there.  It looked like the wind might pick up a little bit tomorrow, so it’s going to be a challenge.

Q:  The local guys haven’t always done so well.  Why do you think you might be that guy that might break through here?

HUDSON SWAFFORD:  I’ve had success here and I’ve not had successful weeks.  It’s kind of late in the year and I feel like I kind of scheduled my fall season more around this home event, playing well.  Not playing Vegas, a tournament that I really like, enjoy the golf course but it’s kind of a decision I wanted to make to be kind of more fresh coming into this week and it seems to be paying off so far.

Yeah, home games can be difficult because you can overthink it.  The golf courses change a lot from when we’re playing at home just beating around with the guys that live here, so it’s definitely a different golf course but same venue.  No, the golf course is in perfect shape.  Just looking forward to kind of getting out there, back out there tomorrow and going.

Q:  How big was it for you to make the adjustment early in the round today and then you got hot in the middle of it?

HUDSON SWAFFORD:  Yeah, it was kind of a ‑‑ I actually played the first three holes, it was okay, nothing great.  And then yeah, hit a great shot on 7 and that kind of just jump‑started my round.  Had a good up‑and‑down on 8, hit one really close on 9, so that was kind of something that kind of got me going.  But all in all it was solid.  Just got a hot putter right now, feel really confident on the greens.  Just trying to give myself the best look at birdie.

Q:  Last question, you’ve made like 16 cuts in a row, I know the next thing for you to is to step to the next level.

HUDSON SWAFFORD:  Yeah, kind of battled the cut thing maybe for a little while, but I don’t really think about it anymore.  My short game’s gotten so much better, I can really rely on it.  I can use it as a weapon now sort of as opposed to something that maybe just held me back a little bit.  It’s nice to make 16 in a row, but I haven’t really thought about it.  Every now and again my caddie brings it up, but it’s just pretty much one round at a time, one shot at a time.

Q:  How many times do you think you played that golf course?

HUDSON SWAFFORD:  I’ve actually played it more than people would think.  When I was first moved down here, we played it actually a fair amount.  Growing up, coming over here playing with Tyler Everett, David Everett’s son, he was the president of Sea Island.  We’d sneak over here, actually did a little fishing on 18 and probably got run off a few times.  I’ve played it a fair amount and then I played it three or four times right before Mexico because I haven’t probably logged in as many rounds as of late over there as I have seaside.

Q:  Have you felt pretty consistent leading up to this week?

HUDSON SWAFFORD:  I have, yeah.  Last week my iron play just kind of held me back.  I was telling my caddie earlier in the week, if I can just get my putter rolling well, and I think we’re having a good week.  My irons kind of let me down.  Been rolling it beautifully for two weeks.  Did some work with my swing coach Scott Hamilton this week and it’s been good.  There’s just a few minimal loose shots, but really all in all it’s been a pretty solid week so far.

Q:  After No. 6 you did very well after that.  Did something kick in for you?

HUDSON SWAFFORD:  Yeah, I put it behind me.  Kind of a grainy lie and I was trying to hit ‑‑ maybe trying to hit it a little too hard and pulled it.  It wasn’t a very good wedge shot.  But I’ve seen some good results all week.  Know I’m swinging it well, just give myself a chance on the greens. 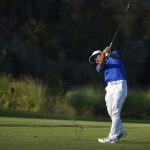 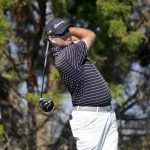