Q. You played okay.
DAVIS LOVE III: Kind of like Dru. Couple bad swings here or there cost me a lot of shots and never got any real momentum going.

But hopefully I hung in there enough to play on the weekend.

Q. (Indiscernible.)
DAVIS LOVE III: I did. I had a lot of good ones there. I didn’t have enough short ones, but hit a good putt there.

So I made a few putts to keep me in it. That was nice.

But today I wish I was caddying. I almost — I was tempted to do something to disrupt him, because he pulled 2-iron on 3 and it was too much club. He tried to hit a little dinky 2-iron in there and he pulled it over the green in a bad place.

And then after that he was just kind of rattled and missed the next three greens and another bad drive. But sometimes — I told him, I did it in Vegas. I was playing great and hit one bad shot and got frustrated and bogeyed four holes in a row and I missed the second, the Saturday cut.

It’s a fine line out here playing really good. He was 3-under through, whatever it was, 11. Looked like was going to make a run with Justin up to the lead, you know.

Justin kind of did the same thing. Tried to hit it in the lake a bunch today, too. Just kind of got away with it. Except for No. 7.

Q. Do you see anything on the swing, on the hooks, or did he just get quick?
DAVIS LOVE III: He just gets quick. He does that. That’s why Mark and Jordan Dempsey have been a doing great job with him around here. That’s why I called Butch about three weeks ago. I said, have you ever had any success with really talented guys that hit it a long way and get quick sometimes?

My mom gave him the best advice at the start of the week: Calm, cool, and collected, Dru. He hit the wrong club, got frustrated, went over to the next tee and sat on the cooler while we finished out, and then he swung really hard on the Par-5.

He went bogey, bogey and that rattled him. Now he knows he’s got to make birdies coming in. That was tough. But, he did a lot of good stuff. He’s going to be really disappointed for a while. He’s embarrassed because he knows he can make the cut and play well enough. He knows he can play well enough to play every tournament for his team. Sometimes he gets messed up in qualifying and doesn’t play well.

Keep telling him, You’re good enough to win some tournaments. Most people that are struggling, they don’t ever win. Sometimes you win and sometimes you play bad, but at least you can win when you get a chance. He’ll learn a lot from it. 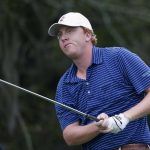