ST. SIMONS ISLAND, GA, March 29, 2017 – After an extensive executive search, the Davis Love Foundation, the host organization of The RSM Classic, has named Todd Thompson Tournament Director. Thompson will help oversee the tournament staff and daily operations of this PGA TOUR FedEx Cup event which will be held this year on November 13-19 at Sea Island Golf Club on St. Simons Island, Georgia.

“The Davis Love Foundation is extremely pleased to have Todd fill this critical role,” said Mark Love, Executive Director of the event. “He has the personality, knowledge and experience to help our tournament continue to be one of the premier events on the PGA TOUR and one that raises important charitable dollars for qualified nonprofits serving children and families.”

Thompson, who will assume the Tournament Director role in early April, is a graduate of the University of Georgia where he was on the golf team from 1983 – 1988. After graduation, he served as the Tournament Director for the Georgia PGA prior to starting the Southeastern Junior Golf Tour (SJGT). Now in its 23rd season, the SJGT has more than 1,000 members and administers an average of 38 events annually in six southeastern states.

“This is a dream job for me, and I couldn’t be more excited to be part of this prestigious event and to work with the Love family,” said Thompson. “It’s the perfect combination for me. I love the game of golf, the St. Simons area and the opportunity to work on a tournament that has already raised more than $7 million for charities.”

Thompson and his wife, Leigh, have two children, Frannie, a senior at Ole Miss, and Davis, a high school senior who has committed to the University of Georgia where he will be a member of the men’s golf team.

Thompson fills the role vacated by Scott Reid who had served as the Tournament Director since its inception in 2010. 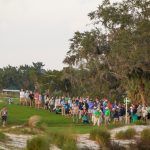 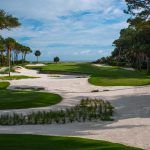