Q. How would you describe your game this week so far?

CAMERON CHAMP: I think if you play from the fairways, it’s very scorable. That’s why I took out my 3 wood and kind of built this strong 2 iron that I’m hitting off the tee a lot. I decided to just get in the fairway, just give myself looks on the greens and that’s been paying off so far, and on top of that I’ve been making the putts, too.

Q. Rookies always talk about when they join the PGA TOUR, having to learn a new course week in and week out. It’s a little different for you. You have some experience on the Seaside course last year and of course during the SECs. Are you able to use that this week?

CAMERON CHAMP: Definitely. That’s kind of my same game plan that I had when I played SECs here, so I’ve just been kind of sticking to it. Like I said, the strong 2 iron this week has been working very well, it’s kind of taking the stress off of me with the wind. Just the lightness of it just kind of works out for this week. Just going to continue what I’m doing.

Q. You spoke earlier in the week about anyone with (inaudible) driving is very impressive. You’re third this week in driving distance, but you’re also third in strokes gained putting. In which one of those do you take more pride?

CAMERON CHAMP: For me, putting for sure. That’s been a part of my game that’s been a struggle up until last year, so last year on the Web that’s all I really did, put my main focus on that since my ball striking is obviously one of my strengths, and giving myself a lot of looks. I just thought I would work on that. Nice to see it starting to pay off at the beginning of this year.

Q. Cameron, always fun watching you play, and as much fun as it is watching you hit the driver, I was so impressed with your putting in the second round, 129 feet in putts.

Q. How much does the weather affect your start because it was cold, it was windy? I know the looser you get, the better you play, and it was tough to get loose today. Did that affect the start at all?

CAMERON CHAMP: No, not really. I mean, the one mistake I made today was just a miss club really. We kind of thought it was more cross, but it was really kind of more into. That’s really, like I said, the only mistake we made today.

Q. You’ll be in the final group, you’ve been in this position before. Will you look back at Sanderson Farms and think, I’ve been there before, I’ve done this?

CAMERON CHAMP: Definitely. You have to be able to have that experience under my belt already and on a course I’m very comfortable with, whether it’s calm or blowing. Really looking forward to the weekend.

Q. We all know about your prodigious drives, but playing at sea level in the cold, how much does that affect the distance?

CAMERON CHAMP: Dramatically. I mean, sea level with cold, I mean, it’s probably, I don’t know, 10, 15 yard difference probably I would say. Just comfortability, and then it’s just kind of getting used to those numbers versus kind of where we are during the rest of the season. Usually we’re not sea level and it’s not this cold, so I’ve been able to adjust pretty well so far.

Q. And the second question for PGA TOUR.com, with the cold weather, do you do any special preparation, any extra stretching or pre round exercises?

CAMERON CHAMP: Definitely. I talked to my physical Davis last night. Yesterday I just felt really stiff, so I kind of did this kind of workout in the morning that helped dramatically. I’m going to do kind of a little small workout after this and do the same thing tomorrow.

Q. What was the best in your opinion of your closing stretch there?

CAMERON CHAMP: What was the best?

CAMERON CHAMP: I think just putting the shots together really. I was having a good day, I just wasn’t really giving myself close enough looks. And then 15 was for me it was a great bunker shot, I thought. It was a very thin lie on an up slope and you can easily blade those.

CAMERON CHAMP: Well, I wasn’t thinking that, but just knowing how the lie is, you just know how to kind of attack it to hit a good bunker shot there and to make the putt.

Then 16, it was kind of a little bit jumpy out of the fairway. I thought it hit it over the green but it worked out, made that putt. Then 17, just kind of

Q. There were a couple that looked like one handed finishes that were shots that ended up well. Was it just a matter of it become cold and the body not working?

CAMERON CHAMP: A few of them I got away with, so it happened twice today. Like I said, on 16 it just came off hot and I thought I hit it over, just the way it looked, so I was like, oh, gosh, and it ended up fine. That happened on another hole today, too, where I got lucky and ended up decently close. It’s just an instant reaction, not like I’m planning it or anything.

Q. Can you think of a simple comparison on sea level and 50 degree weather compared with either Mayakoba or Mississippi in terms of a stock shot, 7 iron might go such and such?

Q. And I know it’s only Friday, but as you’re kind of motoring along out there and see Charlie post at 14, was there any hope to at least get a little bit closer going into the weekend?

CAMERON CHAMP: Not really. Like I said, I knew I was playing good. I didn’t want to force anything on this golf course, so I’ve done that in the past in college events and it didn’t work out too well. Like I said, I’m playing good. I’m putting it probably the best I have in a long time, so I thought if I gave myself enough looks at it, I would capitalize on the majority of them.

Q. You’ve been putting well this fall. Are there any technical improvements or new putter, or just putting well?

CAMERON CHAMP: No, just I’ve just been working at it. Kind of went back to what I was doing. The putter I have now, I’ve been using it for quite a while. Definitely not switching anytime soon.

CAMERON CHAMP: I’ve had it since Web Playoffs. It’s a similar model to the one I won with. 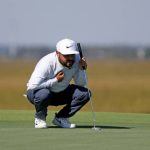 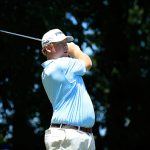