Q:  Here at the RSM Classic.  First of all, Brandt, welcome back, making your first start on the Tour since the Travelers Championship.  Just talk a little bit about being back on Tour.

BRANDT SNEDEKER:  Yeah, semi‑retirement’s not all it’s cracked up to be.  It’s been a long time.  It’s fun to be back, kind of realize what you miss, and I’m probably the most excited guy in the field this week to be playing again.  I was out here all day yesterday practicing.  I can’t remember the last time I was here on a Monday practicing for a tournament.  So it’s fun to be back.  It’s fun to kind of see where my game stands.  I’m excited about the week, excited about where my game is from what I’ve seen at home.  So hopefully I can kind of step right in, not miss a step and play some good golf.

Q:  And I know you finished No. 73 on the FedExCup points list even with the shortened season.  You were really playing some good golf.  Just talk a little bit about how frustrating that was to miss the season.

BRANDT SNEDEKER:  It’s tough.  I don’t like sitting home watching golf on TV when I have a chance to be playing, so it was tough to sit home, watch the Playoffs and watch those guys play some great golf in the year knowing that I was playing the best golf I felt like I played in four, five years tee to green.

So it was kind of a downer way to end the year for me knowing I was at home and I was playing really good golf, but that’s part of golf.  You’re going to get injured from time to time, and mine for whatever reason happened late in the season.  So that being said, I feel like I’m starting this new season ball‑striking‑wise in a great place, feel like I’m hitting it the best I’ve ever hit it.  So I’m excited about stepping in and playing some good golf, and I firmly believe that my best golf’s still ahead of me and I’m looking forward to showing it off this week.

Q:  And before questions, this is your fourth start here at this tournament, tied for 32nd, your best finish in 2011.  Talk a little bit about what makes this tournament one of the favorites among the players on Tour.

BRANDT SNEDEKER:  I’ve got a history, I had a place here for a little while, I spent a lot of time down here.  Everybody ‑‑ you know, Uncle Davis’ tournament, so we all love coming down here and seeing him and having a great week.  It’s just such a special place.  You feel like you’re part of the community when you’re down here.  They do a great job, Davis does a great job running this event.  So much fun.  It’s a golf course I’ve played hundreds of times.  I played college golf here four straight years or three straight years, and then I played countless rounds when I lived down here for a little while.  It’s a course I feel familiar with.  I’m comfortable being down here and it kind of feels like a place that I had a second home for a long time.  It’s an easy start for me and excited about being someplace comfortable and hopefully going to improve on my best finish being 32nd.

Q: What was the hardest part with the injury, not knowing ‑‑

BRANDT SNEDEKER:  Not knowing.  This was an injury that I probably talked to 15 doctors over the course of these last 12 weeks or 14 weeks and not one of them had ever really seen it in a golfer before.  They’d never really run into this kind of injury without a blunt force trauma to cause it.  So the uncertainty of how to fix it, the uncertainty of can it be fixed without surgery, will it go away, will it not.  It’s just tough when you don’t have any real idea of how you’re going to fix it and how you’re going to go about it.  That’s probably the hardest thing.

I’ve had injuries before and there’s always been a start‑stop date.  You know, six weeks and you can hit balls, whatever it might be.  This is the first time where I had an injury where literally doctors are going, I don’t know, I can’t tell you a date when you can get back to playing, we have to wait and see.  That was probably the worst thing you can tell a golfer is just wait and see because you want to be able to go hit balls and practice and kind of get back at it and they’re telling you you can’t do it.  That was probably the toughest part of it.

Q: I walked with you at Muirfield on Tuesday and everything looked fine, you were optimistic and then the next morning on the range, was there one swing, one ‑‑

BRANDT SNEDEKER:  No, it’s a constant buildup.  So what happens with this injury that I have, it’s not a one swing kind of deal, it’s the repetitive nature of what I do, the constant buildup of shot after shot after shot.  It gets to a point where it gets so inflamed and so sore, my chest sternum was moving independently of each other.  So it literally felt like my sternum was cracked or broken, so couldn’t breathe, couldn’t do anything if I went and practiced for a an hour.  But if I go hit a ball and wait 10 minutes, I was okay, but if I practiced or did anything like that, it would just really get to a point where it hurt to breathe, hurt to move, hurt to do anything.

But then I would go away from the golf course for an hour and I would be totally fine.  So that’s what’s been so frustrating with the injury.  I can do everything normally in my normal way of life with no change whatsoever.  I can pick up my kids, I can go work out, do anything like that.  It was the impact of the golf that was causing the pain.  The vibrations, the force that you put on it when you hit a golf ball was traveling up my arms, going in my chest and finding that weak spot in sternum, and it was literately like a tuning fork hitting it every time and felt like I had a broken sternum.

They’ve had it in football players when they land on a football or they get hit in the chest.  Normally they can inject it and get through the season and you give them six weeks off, they’re fine.  With me it was more of a longer process than they thought it was going to be.  Surgery still’s not off the table if it doesn’t go well this week.  It’s one of those things you don’t want to go down that road if you don’t have to.

Q: Going forward, what changes are you making, and I heard something about some diet?

BRANDT SNEDEKER:  Yeah, it’s not fun.  Kind of had to change the way I do everything for probably the third time in my career trying to deal with injuries.  My diet’s a complete change.  I’m on a complete anti‑inflammation diet now where can’t really eat anything that would cause inflammation because any kind of inflammation I get from my diet will go straight to my sternum and cause more pain.  So no sugar, no carbs, nothing that causes any inflammation in your body whatsoever.

So really a miserable, kind of boring diet to say the least.  As a guy who likes to eat food and likes to have fun, this has not been a great change, but something I’ve got to do if I want to be out here for a long period of time.  Change the way completely I work out.  John Tillery, my coach, and I are making changes in my swing to accommodate how I set up to it to try to take the pressure off my chest, take pressure off impact so I’m more solid and stable.  So several changes we’ve made trying to kind of nip this in the bud so it doesn’t become a repetitive injury that’s going to happen once a year every year and kind of hopefully fix it this time and be done.

Q: I know you feel like you can do everything that you did before going through this. Is there any anxiety, though, given (inaudible) on Thursday when you tee it up?

BRANDT SNEDEKER:  Yeah, there’s always some.  Anytime you come back from injury there’s going to be some anxiety.  Even though I’m playing at home, playing in a cart, played 25 holes three days in a row and it was fine, you get a funny lie out here, you’re in the face of a bunker or a plugged lie or uneven lie or something weird up against a tree, I don’t practice that.  I hadn’t really spent much time doing that so I don’t know how it’s going to react to that kind of force.

The only thing I’m worried about is doing something weird, you know, like having a weird impact or a lot of force hit my chest and see if it can handle it.  That’s kind of the point why the doctors wanted me to play this week is we need to find out if what we’ve done has worked or if we need to do something different.  The only way we’re going to find that out is to go play.  Even though I feel great practicing, you’re not going to know until you go play five straight days and if your body can take it or not.  If it can’t take, we’re going to figure out something else to do.

Q: Are you on a ball count this week?

Q: What food do you miss the most, and is there something you’re eating now that you don’t want to eat?

BRANDT SNEDEKER:  I miss french fries like crazy.  I don’t know why, I’ve always loved french fries.  Can’t have potatoes obviously.  Just a bunch of raw vegetables, it just gets boring.  Just boring eating raw vegetables all the time.  Eating broccoli and celery, those are your snacks, carrots and stuff like that and trying to be interesting, find new foods to eat.  So it’s tough, but once you get used to it, I’ve done it now for six weeks so I’m kind of used to it now where it’s not the end of the world.

Q: Could you putt during this time?

BRANDT SNEDEKER:  Yeah, I could putt and chip the whole time but I didn’t do any of it because I know my personality and if I get out there and start doing that, I’ll be, I feel fine for chipping around the green, I’ll go 20 more yards out and I just know how I am.  I’d start saying, well, I feel okay, I’ll go hit some more wedges.  It’s just not going to go well.  Let’s just shut it down and give it time to heal.  So I didn’t really touch a club for over eight weeks, didn’t do anything on the golf course.

Q:  No trips to Southern Soul this week?

BRANDT SNEDEKER:  No.  I think I can get by with smoked chicken, right?  Smoked chicken’s okay, so I’ll probably sneak by there at least once.

Q:  Brandt, best of luck this week.  Glad you’re back.

BRANDT SNEDEKER:  Thanks, appreciate it. 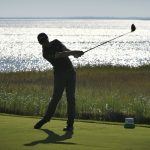 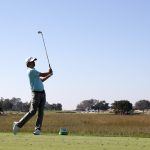