Q. Webb, I guess you must be feeling better after yesterday, you weren’t feeling so flash, but terrific round of golf, 63 out here, five birdies and an eagle on No. 10. Tell me a little bit about how you felt today and about how well you obviously played.

WEBB SIMPSON: Yes, I felt much better, weather was better, everything seemed to be better. Got off to a bit of a slow start, even through 6, and guys were making birdies. Just stayed patient and, you know, it’s always nice to have a hole out. I thought it was going to be a little left of the hole, but it kicked right and went in. Just overall great solid day. I knew I needed something low on the weekend to have a chance, so definitely closer than where I started the day.

Q. Yeah, for sure. And it looks like it’s pretty much neck and neck up there, Charles Howell hasn’t really pulled that far ahead, so you’re certainly within striking distance tomorrow.

WEBB SIMPSON: Yeah, he’s certainly playing well, but I did what I needed to do today and tomorrow I’m going to need a low round again. We’ll see what the weather does, hopefully the rain holds off. Looking forward to at least having a chance.

WEBB SIMPSON: Yeah, that is that was an area of my game that’s been struggling. Kind of in between sand wedge and pitching wedge and ended up going with pitching wedge. I actually thought it was going to end up going left of the hole, but it ended left, kicked right and went in. Fun time to do it.

Q. You had to withdraw last year after the third round to go home and be with your dad, very difficult. (Inaudible.)

WEBB SIMPSON: It really is. Like you said, last year was a sad time for me, my whole family, but my wife and I, we love coming here. It’s a great spot to bring our kids and I love the golf course. It’s good to be back here. Definitely a different feeling than it was last year.

Q. You said you’re shaking off a little bit of a cold. You must be feeling better today, but going into tomorrow, a little bit further back from Charles Howell, what’s the game plan?

WEBB SIMPSON: I knew with how well he was playing, I needed two really good rounds. Job done today, still got a job to do tomorrow. You don’t come out on this golf course and press and try to make birdies, but at the same time, I know that it’s going to take a great round for me to contend.

And we’ll see if the rain holds off. I’m assuming the wind’s going to be similar and the scores will probably be low as well.

Q. You made three bombs out there today, made some long ones.

Q. Are the greens out here, when they’re in this kind of condition, do you feel more confident over the long ones because if your read is correct and your speed is correct, you’re going to be around the hole?

WEBB SIMPSON: I want them as close to the hole as possible, but they’re rolling great, we’re reading them well, and the speed over here’s a little slower than Plantation. So they’re a little bit faster than they were, but still at a speed where you can kind of be aggressive.

Q. Are you the type that once you make one of those, you’ll probably make a few more?

WEBB SIMPSON: No, not necessarily. The key is, we were talking about it on 18, people never talk about green reading, how that’s such a skill. It all comes down to Paul and I reading them the way we’re supposed to. If we’re reading them well, usually in the past couple years we’re making a lot of them.

Q. And then as you started to tell Rex, you were aiming a little bit left of the hole on 10?

WEBB SIMPSON: No, I was aiming right of the hole, but I thought it was going to come down left of the hole and it just kind of kicked right and went in.

Q. Okay. And I heard you talk yesterday about you’re feeling a little bit under the weather. How close did you come to not playing?

WEBB SIMPSON: I was close yesterday to not playing. I had to get an IV right before I played. I only had about a 20 minute warmup and I didn’t know if I was going to play. But the IV helped and was able to have a quick warmup, then got out there and kind of felt better as the day went on.

Q. Did you get that out here?

Q. There’s a facility out here?

Q. Wasn’t anything you ate or anything like that?

WEBB SIMPSON: I don’t think so. They just thought it was some kind of bug.

Q. Comment a little bit, I know you’re worried about your own game and everything, but Charles is playing pretty good out there. Is it going to take an extraordinary effort if he finishes well for somebody to come and get him tomorrow?

WEBB SIMPSON: Yeah, I mean, he’s playing great golf. You know, this course today played in a way where Patrick shot 61, I shot 63. Tomorrow, I don’t think we’re going to have much wind, so I’m sure there’s going to be some low ones tomorrow and that’s kind of what we need being so far back, we need easy conditions.

Q. Was there ever any doubt that you were going to play this year? There had somebody some tough memories, but

WEBB SIMPSON: No, no, I love coming here. We’ve come, I think, pretty much every year since it started. It’s one of my favorites.

Q. And how close is this to sometimes the conditions of the greens, things like that, of the Stadium course at THE PLAYERS?

WEBB SIMPSON: Yeah. I think it’s the same type of strain, but I love bermuda greens. Bermuda nowadays runs so well. It feels nice being on bermuda. 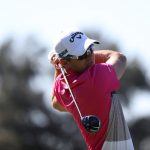 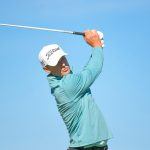