“Being from Georgia, going to college here, and loving golf, I couldn’t be more excited to be performing at this event,” said Swindell.  “It’s such a cool venue and for a special cause.  You should be here.”

“We’re thrilled to bring the Platinum selling artist to the Golden Isles to perform,” said Davis Love III, Tournament Host, 21-time PGA TOUR winner and 2016 U.S. Ryder Cup Captain. “He is a fantastic performer and one of Georgia’s own.  There’s no doubt he’ll be performing before a sell-out crowd. This concert would not be possible without the support of Southeast Georgia Health System and RSM.”

“We are proud to be the Presenting Sponsor of this concert along with the tournament’s Youth Day activities, as well as the Official Medical Provider for this prestigious event,” said Michael D. Scherneck, President and CEO of Southeast Georgia Health System. “The RSM Classic is a world-class event that attracts visitors to our beautiful Golden Isles and we are happy to partner with the Davis Love Foundation on an event that has such a positive impact on our community.”

Swindell, who studied marketing at Georgia Southern, recently earned his fifth consecutive No. 1 single with “You Should Be Here.” Co-written by Swindell and Ashley Gorley, the song was No. 1 on Billboard’s Hot Country Songs chart for four weeks (tally of digital streams, radio airplay and sales) and held multi-week runs on top of both country airplay charts. In addition to selling over 550,000 copies, “You Should Be Here” has racked up over 30 million streams and more than 15 million Youtube views. The single follows Swindell’s first four consecutive singles as a solo artist (including his latest Gold-certified No. 1 smash “Let Me See Ya Girl,” along with Platinum-certified mega hits “Hope You Get Lonely Tonight,” “Ain’t Worth The Whiskey” and “Chillin’ It”) and marks his eighth overall as a songwriter.

Tickets are limited and can be purchased at www.rsmclassic.com.

About The RSM Classic (www.RSMClassic.com)

The RSM Classic is an Official PGA TOUR FedExCup Event played on the Seaside and Plantation courses at Sea Island Golf Club located on St. Simons Island, Georgia. The tournament (which will be held November 14 – 20 in 2016) is hosted by the Davis Love Foundation, which was established by PGA TOUR pro golfer Davis Love III for the purpose of contributing to the wellbeing and progress of society by supporting both national and community-based programs that focus on children and their families. The RSM Classic is named for title sponsor RSM US LLP (formerly McGladrey LLP), the leading provider of audit, tax and consulting services focused on the middle market, with more than 9,000 people in 86 offices nationwide. 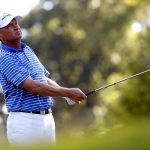