Q.  Blayne, you had a career low on Seaside last year, first round, now you’re up near the lead on Plantation on Thursday, so what is it with this place and Thursdays with you?

BLAYNE BARBER:  Yeah, I just always have liked this place.  We played the SEC Championship here every year when I was in school and I had success here last year.  I just play well kind of on bermudagrass in the southeast, it’s just what I grew up with, what I’m used to.  It’s been a long year, just looking forward to a good week to finish it off.

Q.  It is a long year and it ends in a place that you nearly won before.  How much do you think back to that playoff last year and how close you were?

BLAYNE BARBER:  Yeah, it can be I guess good and bad, you can put too much pressure on yourself.  But I feel like I really haven’t had any great finishes this year, so I’m due and the game has been shaping up nicely.  I feel rested after the break in between seasons, kind of taking it easy this fall.  Coming here, I just kind of had good vibes and looking forward to the week.

Q.  Describe what the conditions were.  You’ve played here long enough, I don’t really know that it’s anything to kind of say it stood out from another, but just kind of your comments?

BLAYNE BARBER:  Well, it actually got less windy as the day went on.  It was colder and windier this morning, the ball wasn’t going as far with the temperature.  The last six or seven holes it kind of laid down and it was nice.  It’s a beautiful day today.  But this place, the defense is definitely the wind, so I think I’m rooting for wind the next three days.  I think it kind of separates the field and it will make it a good challenge.

Q.  You were in the playoff last year, what is it about this place?

BLAYNE BARBER:  Just always like playing here.  I like bermudagrass, I like being close to home.  I’ve played here a lot, too.  I played here in college a lot, just somewhere I’m comfortable.

Q.  Do you think the Plantation course is a little tougher than Seaside?

BLAYNE BARBER:  It’s different.  The par 5s, there’s four par 5s versus two and they’re all reachable, so I made four birdies on those today.  There’s maybe a little bit more ability to get a lower score going.  But Seaside, if you’re hitting it well, you can do the same, it just gets a little windier on that side as exposed as the back nine is. 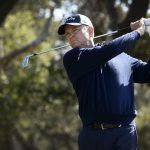 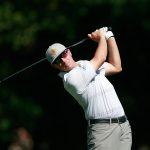